Acting as a bridge between academic research and video games production, La Forge combines Ubisoft’s assets and data with the expertise of university researchers to drive innovation forward in the video game industry, while contributing to solving real-world problems through scientific publications.

After five years of exploration and experimentation, Yves Jacquier, Executive Director of Ubisoft La Forge, reflects on the expansion of the La Forge network and emphasizes its strategic role for the future, saying:

Our goal is to continue to grow while preserving our DNA: providing Ubisoft with in-depth knowledge on the disruptive technologies that empower our teams to deliver unique and immersive experiences, through responsible, people-centric development.”

Recent innovations from La Forge that are shaping the future of games, include:

Through this expansion, La Forge is accelerating the implementation of its unique collaborative model, which has become a leading reference in R&D in the video game industry. With more than 70 prototypes – 30 of which have already been integrated into production technologies – and more than 25 major scientific publications, La Forge now represents the majority of the Ubisoft’s technological R&D activities, helping to support game creators, create increasingly realistic worlds, and develop high-performance tools that will improve player experience.

Stay up-to-date with La Forge and all our current project by following Ubisoft Toronto on Twitter, Instagram and LinkedIn. 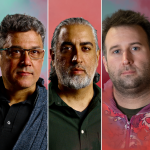