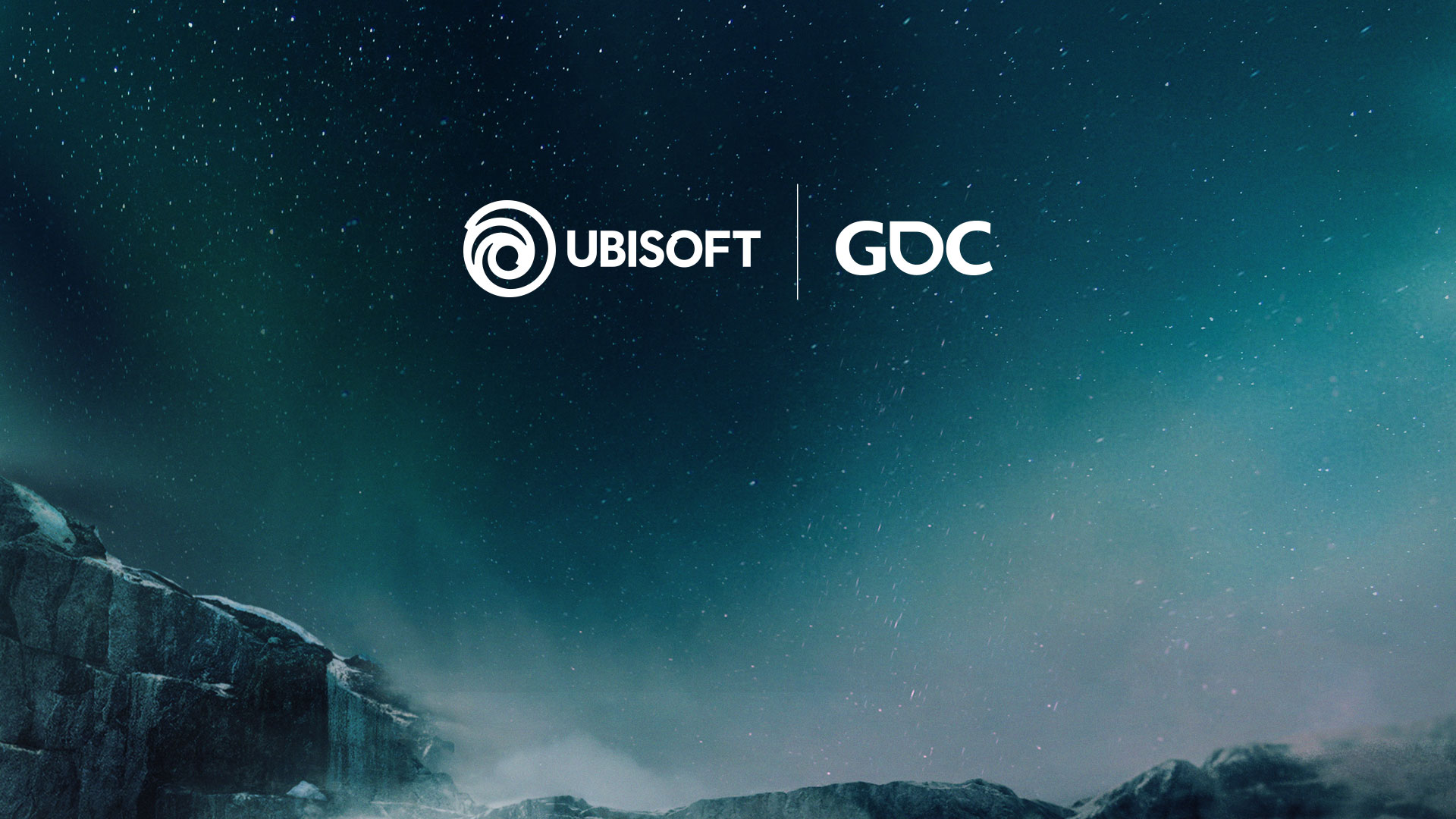 With a diverse combination of top programmers, artists, designers, and more, the Game Developers Conference (GDC) has brought the game development community together to progress change, advance ideas, and foster problem-solving skills within the industry since 1988.

This year’s online conference means more people around the world can attend. But if you still weren’t able to make it, we’re here to share some insights from the three talks featuring experts from Ubisoft Toronto.

Dive Into The Tech Behind Watch Dogs: Legion 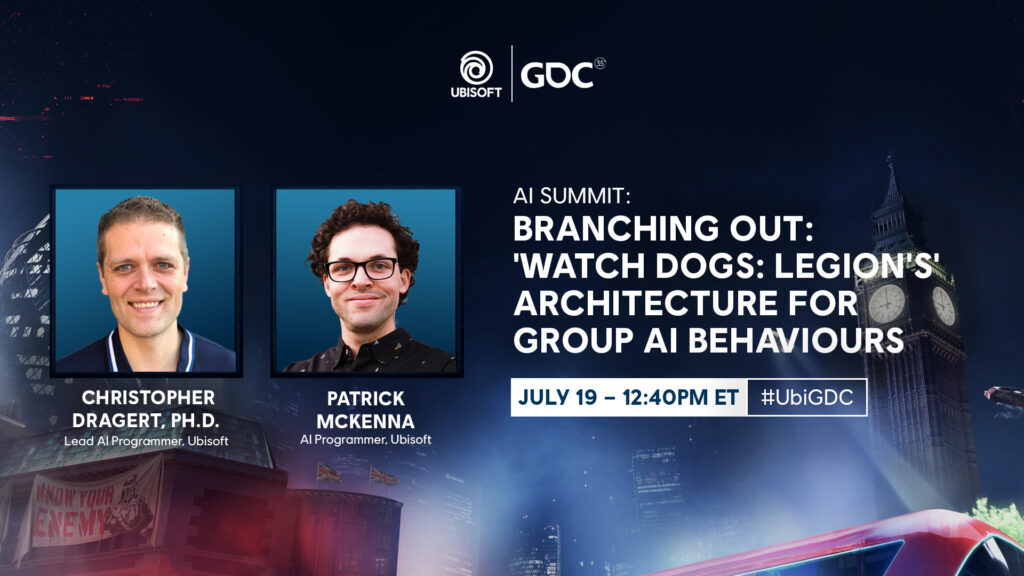 McKenna and Dragert hosted a session centred around the architecture and group AI behaviors within Watch Dogs: Legion. This talk presented the aLiVE Group Behaviour System, a highly modular AI architecture used to provide a realistic game experience for players that aspects of the game like multi-character interactions and world tone.

Attendees gained an in-depth understanding of how to construct a high-functioning AI system that seamlessly balances the use of multiple gameplay features to create the best user experience.

“Watch Dogs is a game about people”

Play As Anyone allows players to recruit anyone in the open world.

Open-world AI behaviours are crucial to the player experience and authenticity of the world. Character interactions need to stand up to player scrutiny 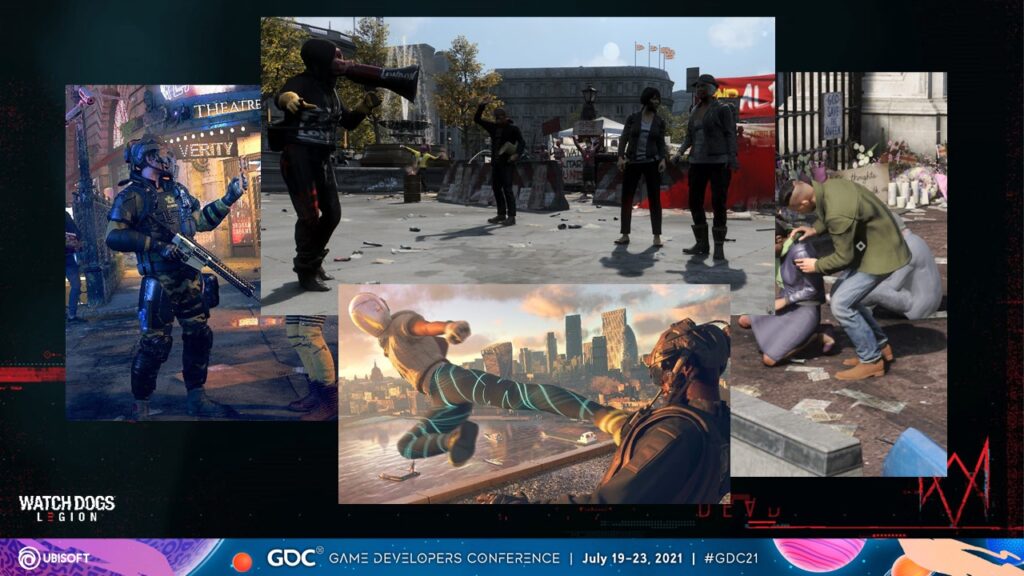 Synched animations provide the appearance of interactions, they fall apart under scrutiny.

Group contexts provide opportunities for player interaction ➡️ A guard that understands he’s detaining the hostage / a hostage that understands what to do when the player distracts the guard. 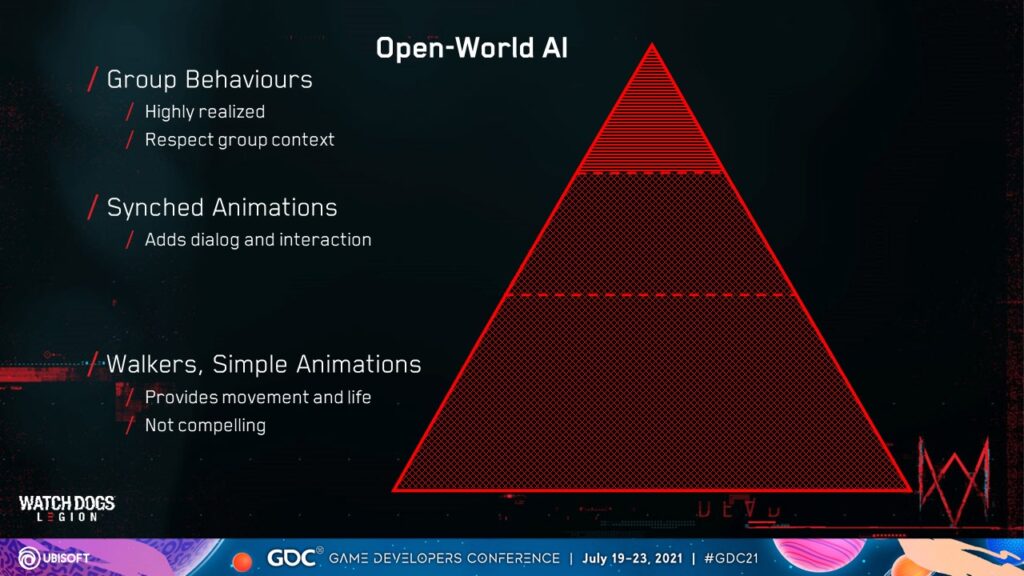 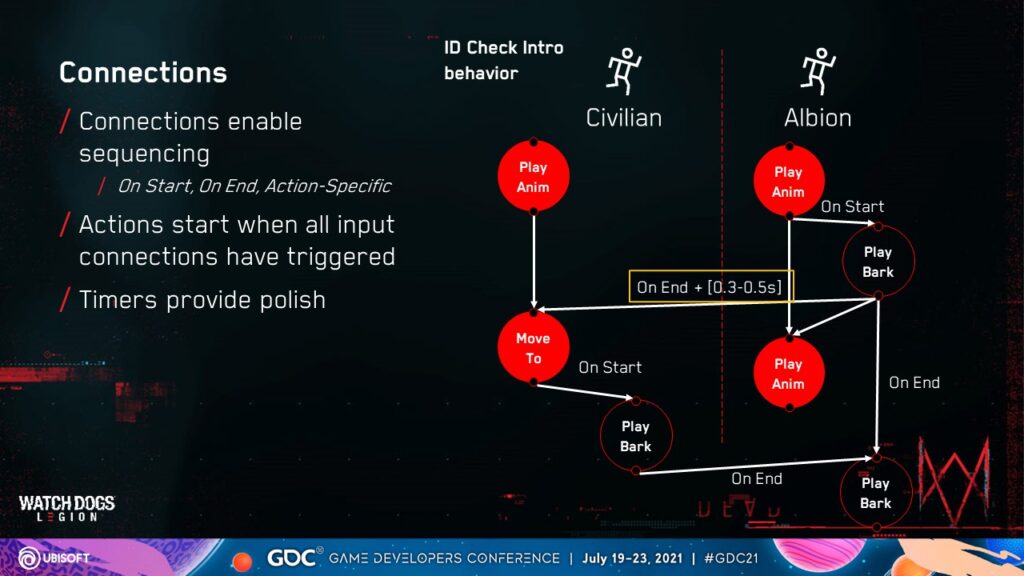 We define how Group Behaviours react to external stimuli with Branches.

As the strategy executes, it’s typical for the set of active Branches to change as the group context evolves. This is what sets the Group Behaviour System apart from our existing “living city” agents. 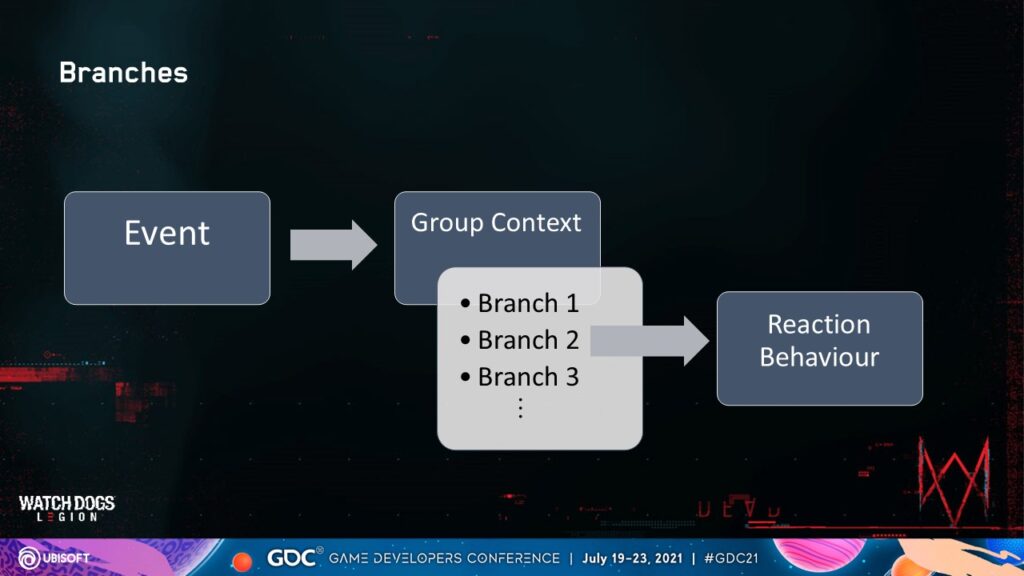 From the data authoring perspective, the Branch definitions and reaction Behaviours are the most tricky-to-get-right aspect of the Group Behaviour System. 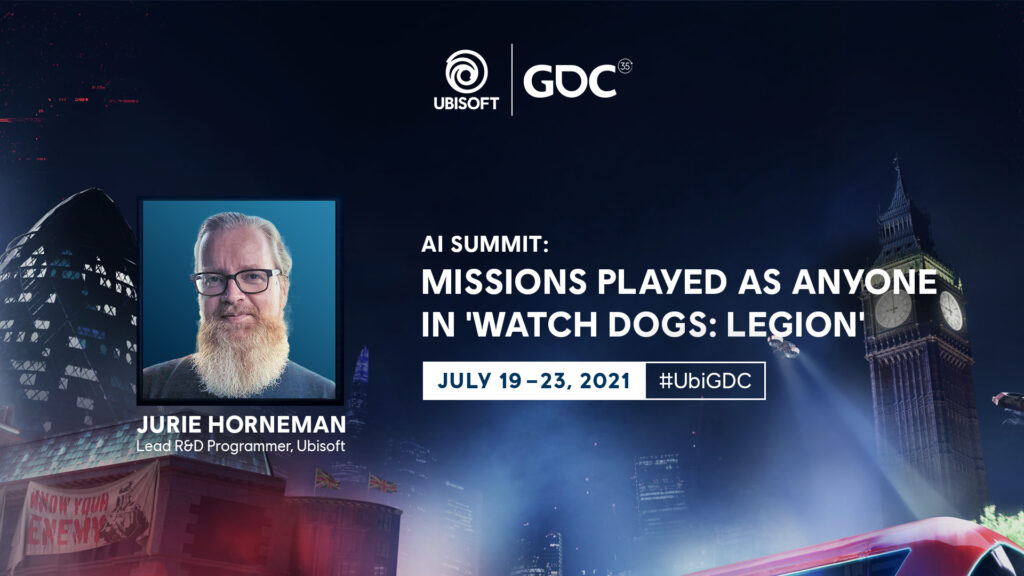 AI Summit: Missions Played As Anyone in Watch Dogs: Legion

Jurie Horneman led a session centred around crafting missions within Watch Dogs: Legion, and the technology used to create the game’s Play As Anyone feature, which allows players to recruit and control those players in the future-London setting.

Watch Dogs: Legion has a variety of missions built to feature characters carefully generated through a unique procedural system to support the narrative.

Attendees learned from Horneman’s first-hand knowledge of how to approach mission technology in a way that works well with procedural generation and social simulation. 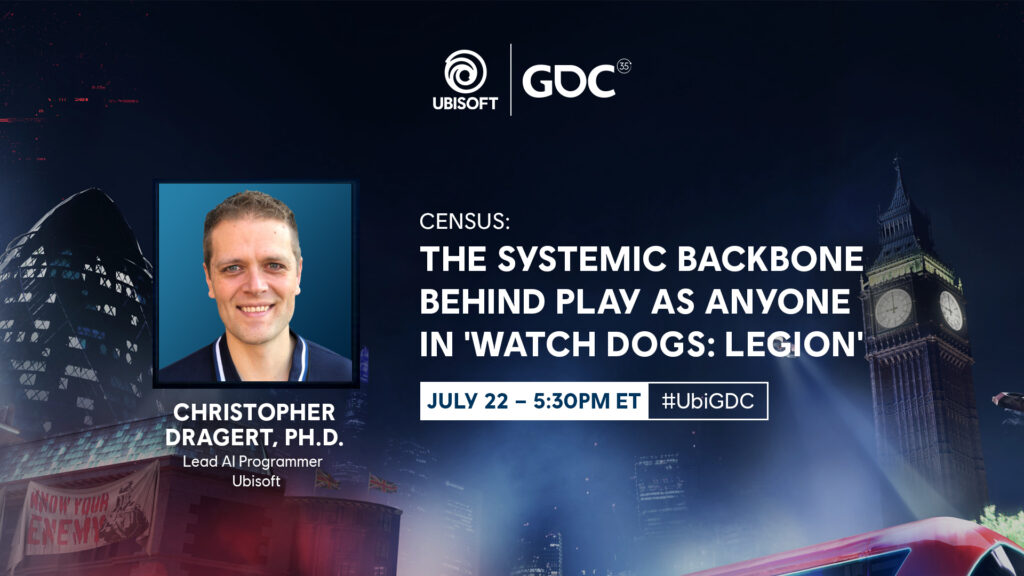 Census: The Systemic Backbone Behind Play As Anyone in Watch Dogs: Legion

Dragert’s solo session focused on Census, Watch Dogs: Legion’s systematic backbone. This procedural system is an essential part of both a character’s life within the game and how they’re integrated into the gameplay world. Census generates the high-functioning social profiles that make Watch Dogs: Legion characters feel alive in the game.

This session taught attendees about creating a procedural system for a AAA game and covered the challenges and solutions Dragert’s team faced throughout production.

Census is the name for the system that drives Play As Anyone — which means characters that are normally background NPCs need a lot more care and depth to reward recruitment gameplay. 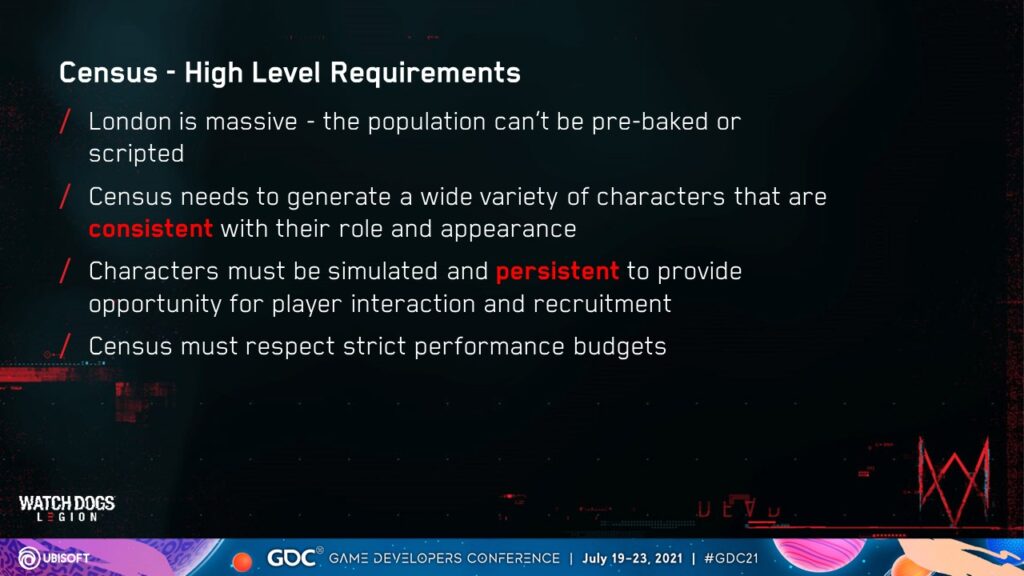 Character profiles are made up of consistent values across 19 interconnected demographic fields. They’re represented through a bi-directional relation database. With that we can generate tens of millions of unique, consistent character profiles. 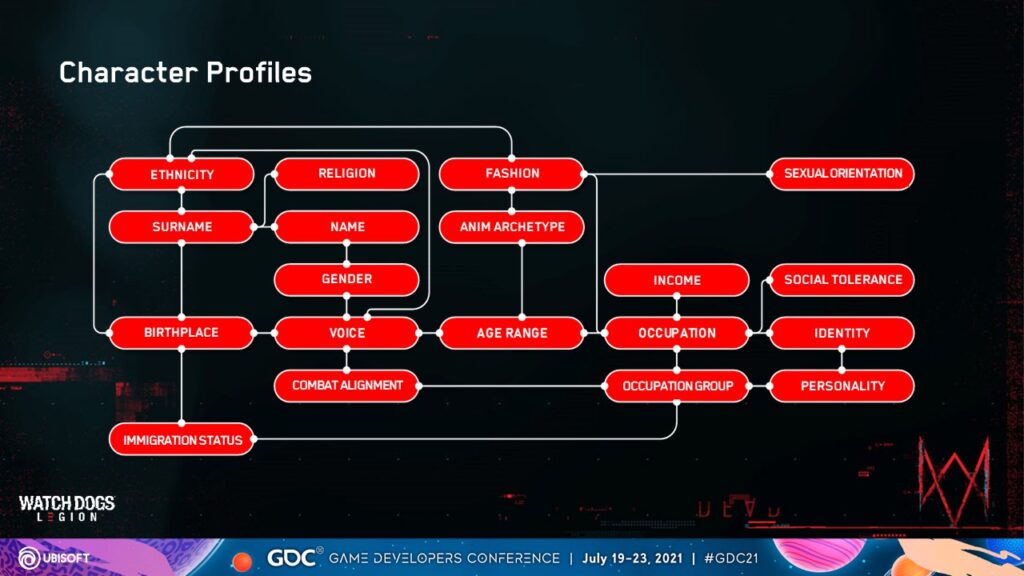 The next part of Census is the simulation layer. Once we’ve generated these characters, what is their role  in our game? 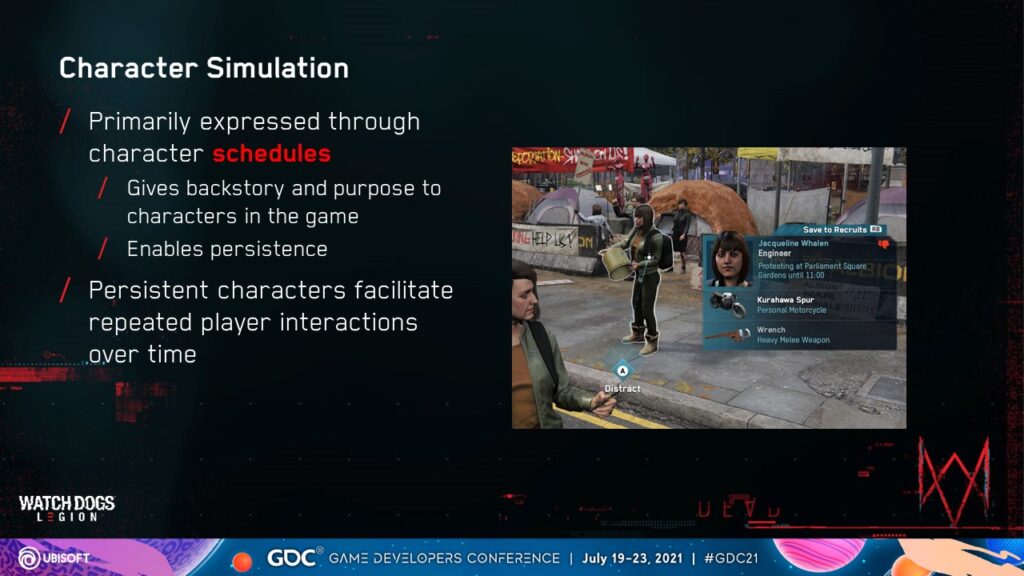 Characters don’t require all the Census info at all times. “Upressing” provides a ‘level of detail’ system. It’s a staged system we can move characters through to decide which Census operations to perform and when. 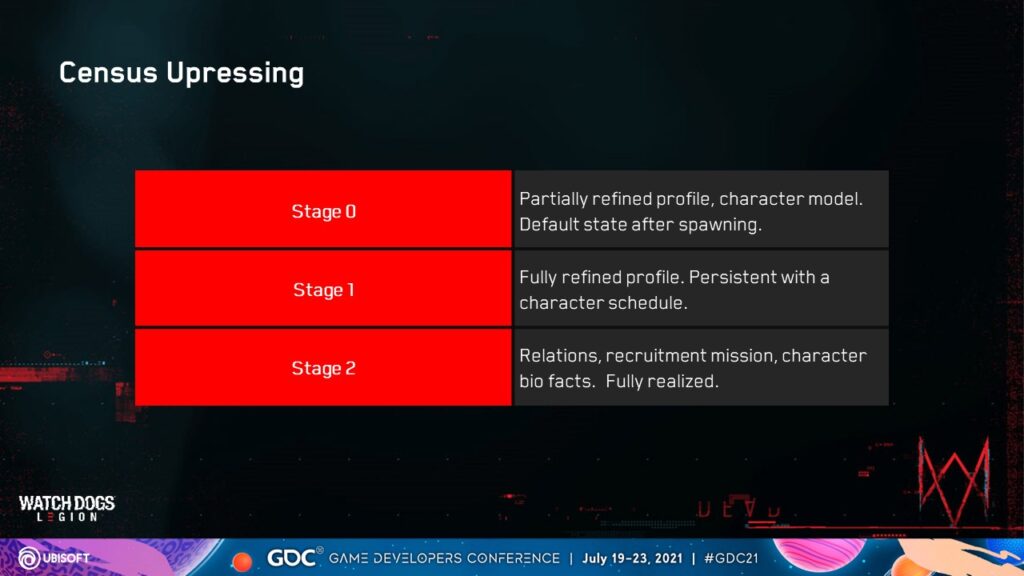 And finally, recruitment in Watch Dogs: Legion. It’s the primary link between the simulation and the gameplay.

‘Affinity’ is the basis of this system, and along with character memories, it ties characters to player actions at a deep level. 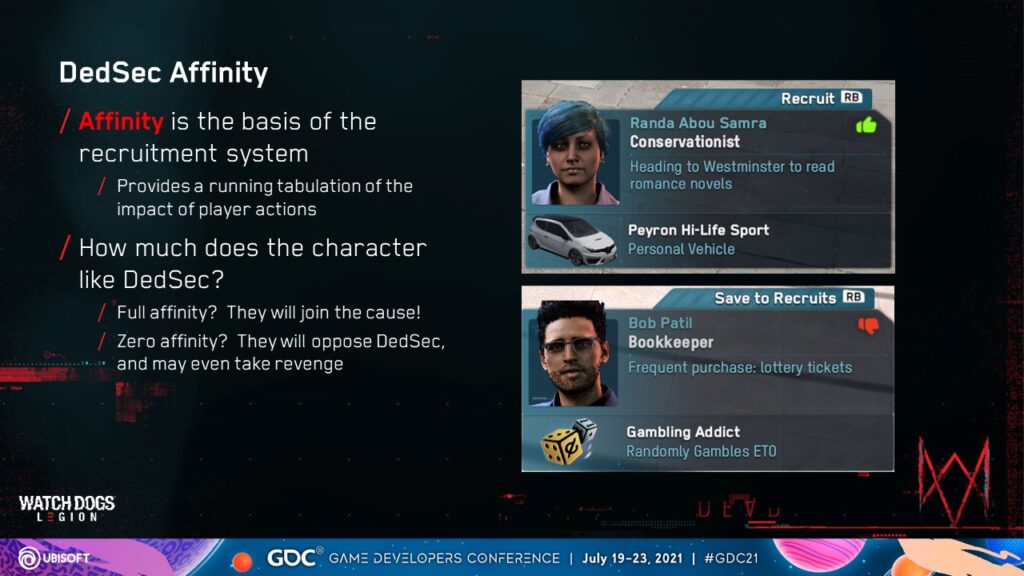 Census is a powerful system used to generate believable characters. The wide range of generated characters allows players to find people that appeal to them and make them the stars of their game.

That was just a peek into the complexities of the systems built by Lead AI Programmer Christopher Dragert, AI Programmer Patrick McKenna, Lead R&D Programmer Jurie Horneman, and the rest of the Watch Dogs: Legion team.

Thanks for following along!